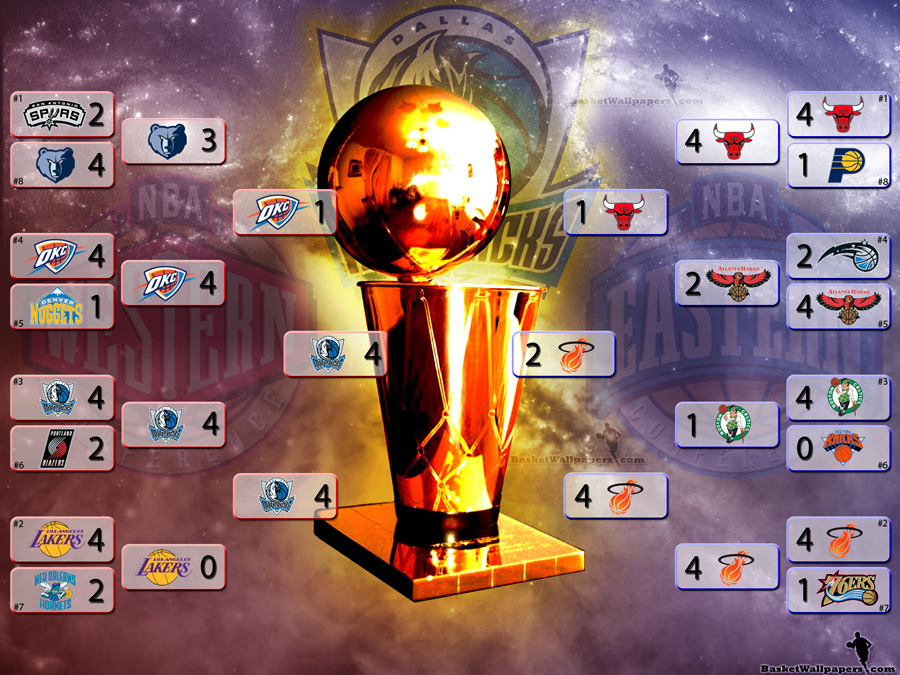 2011 NBA Finals are over – Dallas Mavericks are new NBA champions… in previous update of playoffs wallpaper, after game 5, i wrote that i think Mavs will close series in game 6 because Heat was just playing under their expected level through most of finals series (especially LeBron James in last 3 games)… anyway, few words about new NBA champions – this is the 1st NBA title in Dallas Mavericks history, and first ring for many players who were in finals or close to finals in past in their careers but were on loosing team… first Dirk Nowitzki who lost to Heat back in 2006, Jason Kidd who lost 2 times in finals as member of Nets, Stojakovic who lost that questionable series against Lakers in west finals as Kings member, and also Shawn Marion, Jason Terry who passed 30 years and will probably retire in years to come… on the other hand, it’s first title for young guys who might lead Mavericks team in years to come, players like Jose Juan Barea, Ian Mahinmi and Dominique Jones… i am not sure if i forgot to mention some players… oh yes, centers – Tyson Chandler and Brandan Haywood… anyway, it’s almost 5 am here and i’ll go to sleep :)))) congrats to Dallas Mavericks team, coach Rick Carlisle and whole mavs organization… oh yes, Mark Cuban :)))

And the last for this update – 2011 NBA playoffs brackets wallpaper

this is 4th year i’m posting playoffs wallpaper on site and will keep it updated day by day… this year i used the same design as i did in 2010, but i reversed sides of conferences (now east is right and west is on left side of wallpaper)… wallpaper was created by BasketWallpapers.com team…