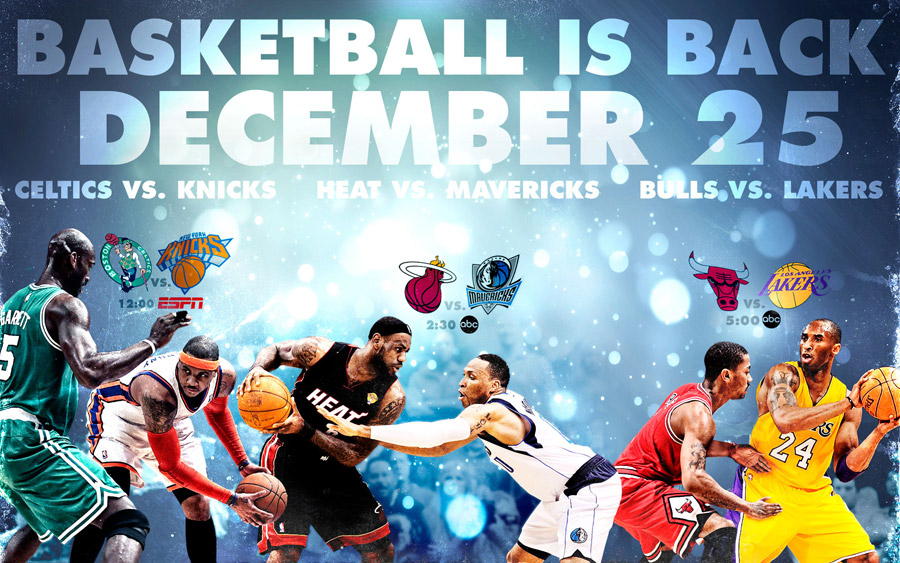 NBA Is Back Widescreen Wallpaper

as most of you know, NBA team owners and players association are very close to final deal which means NBA lockout 2011 is finally over

it’s already announced all over the mainstream and internet media and the first games of 2011-12 season will be played on Dec. 25th 2011… this is wallpaper made for start of new NBA season and the end of 2011 lockout, featuring 3 matches that will be played in first day of upcoming season

Also i want to add few words regarding lockout and my personal life… Lockout first… In past 2 months i have talked to several friends of mine and to some visitors of this site over email and every time lockout subject was brought to conversation i was telling people that NBA will not allow lockout to ruin 2012 All-Star game… when they asked why i told them – because NBA makes TONS of revenue during All-Star weekend… same goes for Christmas day games, those are some of the best matchups year after year, a true cherry on top of cake for every basketball fan on planet… and lots of viewers = lots of cash and revenue for NBA… so i secretly hoped that lockout will end up in short time so we’ll get Christmas games also, which happened

sadly, most of people i talked to about this did not agree with me, some fans from Europe even hoped whole season will be closed so NBA players will come to play in teams competing in Euroleague

On the other hand, one of reasons i didn’t post anything new on site for over 6 weeks is i kinda boycotted NBA… Why, because we, fans, suffered during lockout… Lockout that happened because some millionaires and billionaires are greeedy for more… Players who earn millions every year, team owners who earn hundreds of millions if not billions a year couldn’t make a deal about few %s… 7% of 1 million is 70000… if some player who earns millions can explain to me why he can’t live without 7% of his salary while most of ppl on planet live with 70000 for whole year i’m going to kill myself… same goes for team owners… truth is they are all fcking greedy and always need more of green papers, which is sad !!!!! If i had someone to give me not million, i’d be happy with few 100.000s so i can buy my home (so i’m not forced to pay rent every month) to help my g/f pay her debt to bank and to help my younger sister who got 5 years old son to get a job, to help my mom and dad… man i’d be happy like no one on planet… and with that money i would solve my biggest problem in life, plus i would help several people around me to make their lives better… and what all these greedy guys do, they are fighting over 7% for months while most of them can burn 80% of their salary and would still have more then 90% of people on planet… fck it, i’m over with this, cause i can write about this for hours… let’s go to posting some walls for all of you good people

this wallpaper was made by Ryan Hurst…