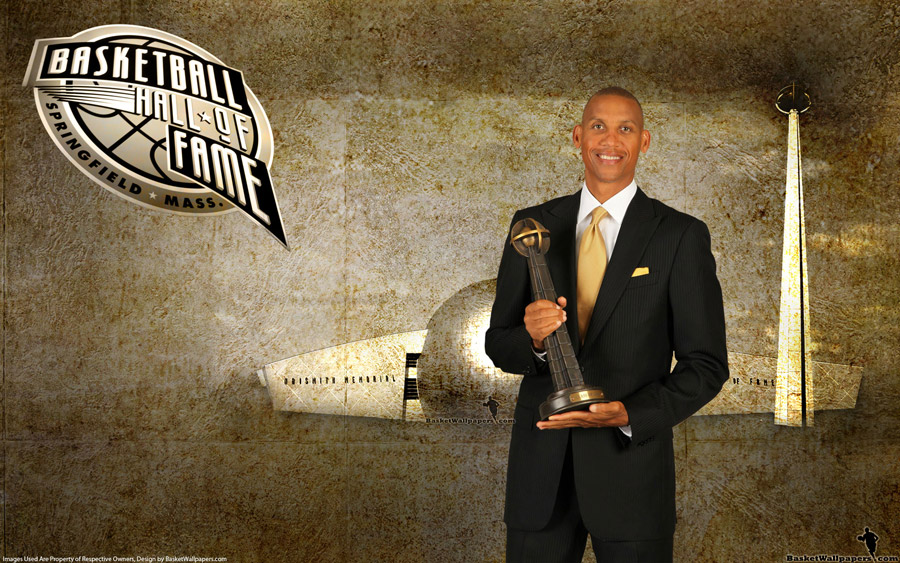 One more fresh Hall of Fame member… it’s widescreen wallpaper of Reggie Miller holding Hall of Fame trophy with HoF building and logos in background… also, i would like toa dd few more words about Reggie, a player i never liked a lot during his career (because he played against Bulls) but at one moment he won my respect for life… it wasn’t becuase some of his legendary buzzer-beaters but sportsmanship gesture after 2002 FIBA World Cup quarter-finals game… It was match between USA and Yugoslavia… USA was big favorite to win match and move to semi-finals but Yugoslavian team won the game (very tough match)… USA team lost the last game in group stage to Argentina few days earlier and it was the first time in history that NBA roster lost a game in WC (even worse for this team, WC was played in USA so they had home-court advantage)… anyway, there was quarter-finals match, USA lost and whole USA team just stood on court in shock – NBA roster was eliminated from WC for the first time ever… the first player that came to Yugoslavian team and shaked hands was Reggie Miller and for that sportsmanship gesture i respect him more then i ever could for his legndary career in Pacers team

Wallpaper was made by BasketWallpapers.com Team…
Share With Friends